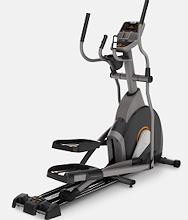 AFG elliptical trainers are built by Johnson Fitness, one of the largest fitness equipment companies in the world.  I had a chance to visit their U.S. headquarters out of Madison WI, and I was impressed with not only their products but their operation.

Johnson Fitness also builds Horizon and LiveStrong fitness equipment.  They were investing considerable effort in the LiveStrong brand, but things got complicated.  For those not familiar with the LiveStrong name, it was a charity focused on fighting cancer and was started by Lance Armstrong, the legendary Tour de France winner/cheater.  Johnson worked out a deal where they would sell treadmills, elliptical trainers and exercise bikes under the LiveStrong brand and give a portion of the profits to the LiveStrong Foundation.

It sounded like a winning proposition until the LiveStrong brand got blind sided with the Lance Armstrong doping scandal.  In particular the LiveStrong fitness products took a hit.  Meanwhile Johnson Fitness was promoting the AFG brand and selling through certain outlets.  Apparently they have decided to drop the LiveStrong brand.

When I visited the Johnson Fitness headquarters they impressed upon me the thought process that went into the AFG elliptical trainer.  The company did considerable research to determine what makes people buy ellipticals, and the feel was the number one factor. They researched further and determined what it was about the feel and came up with their SIXstar Certification™.  Here are some of the design features based on that research…

ZeroGap Pedal Distance – Pedals are placed with zero distance between them to eliminate stress on hips and back. Pedals that are too far apart can particularly be stressful to woman because of their physical make-up. With the LiveStrong ellipticals you won’t feel like you are riding a horse.

It is for this reason that AFG ellipticals are front drive. With a rear drive machine the pedals are further apart because of the drive mechanism that is positioned in between.

Easy Access — The pedals are placed low to the ground and are easier to step on and off.  This is in comparison to rear drive ellipticals where you have to step over the center mechanism.  Also, this machine is suited for individuals who need an elliptical for a basement with a low ceiling. However, you want to  verify the height of your ceiling and compare that to the user height, and the height of the pedal when it is at the top of the elliptical motion.

A More Natural Foot Path — The AFG elliptical trainer stride mimics a natural running or walking motion while minimizing fatigue. It is more flat than oval.

I have few comments.  First, I prefer the two dual rail design found on most of the Sole front drive ellipticals. Excluding the AFG 18.1AXT, all the AFG ellipticals have pedals that ride on a single rail. The Sole design provides a more stable elliptical motion over the long run.

Second, I would like to see AFG ellipticals have interconnectivity with the Internet so you can track your progress online and get motivation programming.  A trend you will find in brands like NordicTrack.